A rich history for a famous old club...

However, 'Burnley Rovers' soon switched codes and became Burnley Football Club in 1882. They moved to their Turf Moor home shortly afterwards, at the invitation of the town's cricket club, which is still uniquely situated next to the stadium.

FA Cup campaigns gave way to organised football in 1888 with the foundation of the Football League - and since then Burnley have claimed every major honour, with the exception of the League Cup.

The first honour was a Second Division title in 1897-98 and the club's improved fortunes were finally reflected in an FA Cup triumph in 1914, with a 1-0 win against Liverpool coming just months before the outbreak of the Great War. 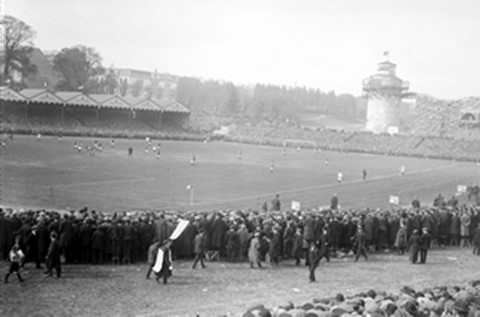 Following the War, the Clarets continued to make their mark on the domestic game and in the 1920-21 season the team enjoyed a remarkable unbeaten run of 30 league matches as they led the club to an inaugural First Division title, having been runners-up the previous season.

That magnificent league record stood for over 80 years, until being battered by Arsenal in the 2003/04 season. 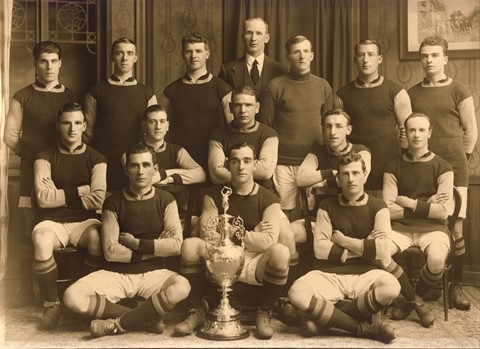 By the outbreak of the Second World War, the Clarets were back in the Second Division. However, the first season of organised football after the War saw them promoted as runners-up to Manchester City - and they also reached their first Wembley final, where they lost the FA Cup 1-0 to Charlton Athletic.

This led to arguably the most exciting time in the club's history.

By the late 1950's and early 1960's the claret and blue of Burnley had become the most feared colours in the domestic game and, following several near misses, the First Division title again came the club's way on the very last day of the 1959-1960 season at Manchester City (picture of Brian Pilkington's opening goal pictured at head of story). 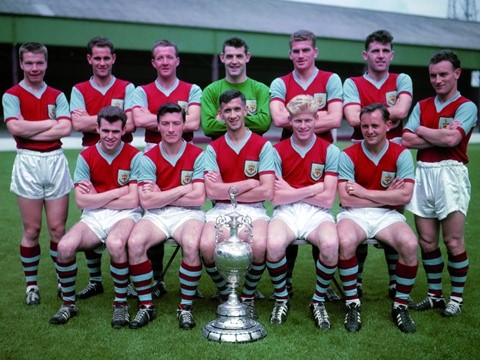 And the celebrations that followed. 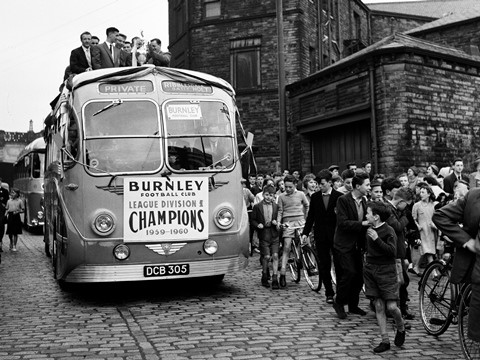 Two seasons later the club claimed the double nobody wants - runners-up to Ipswich in the League and Tottenham Hotspur in the FA Cup Final, losing 3-1 in an epic Wembley battle. 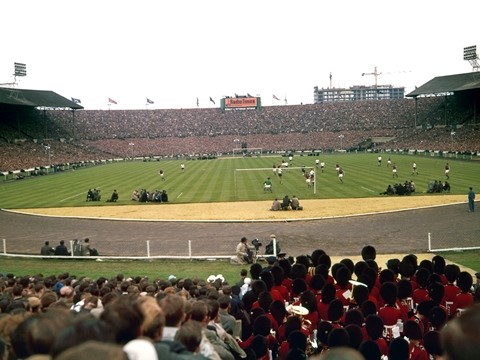 The 1960's also saw two European campaigns. The 1960 title-winning side beat French Champions, Reims, in the first round, but went out to Hamburg at the next stage.

Finishing third in the 1965-66 season was then good enough to earn a place in the Inter-Cities Fairs Cup (later known as the UEFA Cup and Europa League) and Burnley marched on splendidly. Stuttgart (Germany) and Lausanne (Switzerland) were early casualties before Burnley pulled-off a surprise win against Naples. Eintracht Frankfurt were the quarter final opponents and, after a draw in Germany, a place in the last four looked very much on the cards, but the Clarets were beaten 2-1 at Turf Moor.

That exciting decade ended with Burnley's influence at the very top beginning to wane and they were eventually relegated in 1971.

However, two seasons later, they were back in the top flight after winning the Second Division title with a 1-1 draw at Deepdale on the final day of the season. 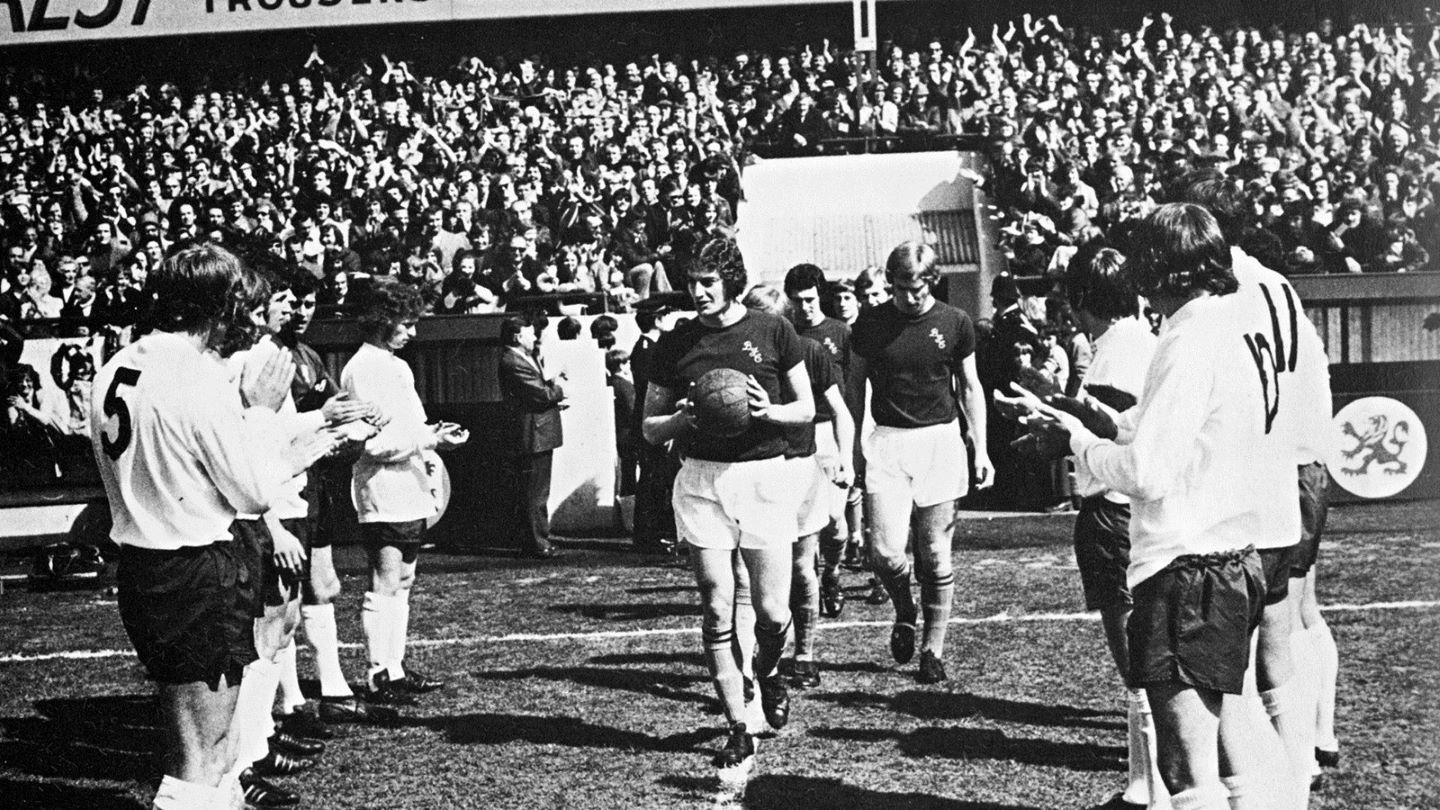 Within three seasons Burnley were relegated to the Second Divison again as Jimmy Adamson's 'Team of the Seventies' failed to deliver. And as the decade drew to a close, Burnley found life back in the Second Division increasingly tough and slipped into the third tier in 1980.

Under club stalwart Brian Miller, the Third Division title was cemented in 1982, but the following season, despite reaching the semi-finals of the League Cup and quarter-finals of the FA Cup, relegation resulted in Third Division football returning as the fallow years continued.

Two seasons later the unbelievable happened and Burnley found themselves dropping into the basement division - just 10 years since their last game in the top flight!

The second season in the Fourth Division saw the introduction of automatic relegation from the Football League to the Vauxhall Conference for the bottom club - and dramatically Burnley had to win their last game of the season to avoid the dropping out of the Football League they, along with 11 other clubs, helped to found.

Amid emotional scenes of drama of the very highest quality the Clarets secured a 2-1 win against Orient and sent Lincoln City down instead.

Dramatic scenes at the end of 'The Orient Game' 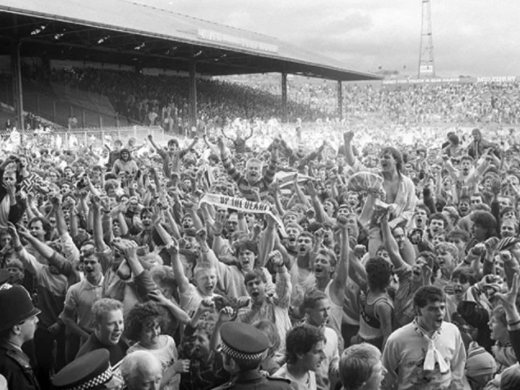 That near miss sparked a welcome revival in Burnley's fortunes, with a trip to Wembley in the Sherpa Van Trophy coming just 12 months later. The final ended in a 2-0 defeat at the hands of fellow Fourth Division rivals Wolverhampton Wanderers in front of over 80,000 supporters... but Burnley were back!

The 1990's proved to be an interesting time in the club's history.

In 1992, the Clarets created history by becoming only the second team to win all four divisional titles in domestic soccer (Wolves being the first) when they won the Fourth Division and escaped from the league basement after seven seasons.

Two years later they were promoted to the new First Division via a 4-2 Wembley play-off final success against Stockport County; but unfortunately, lasted only one season at a higher level before
suffering the blip of relegation.

Off the field, the club was now moving forwards. There was a £6.5m redevelopment of Turf Moor, with two new stands giving Burnley a 22,000-plus all-seater stadium.

On the field, Stan Ternent was appointed as manager in June 1998, following on from former England star Chris Waddle, who was in charge as a player-manager the previous season.

And Stan's successful six-year reign would ultimately lay the foundations for a revival in the club's fortunes and cement him as a pivotal figure in recent history. 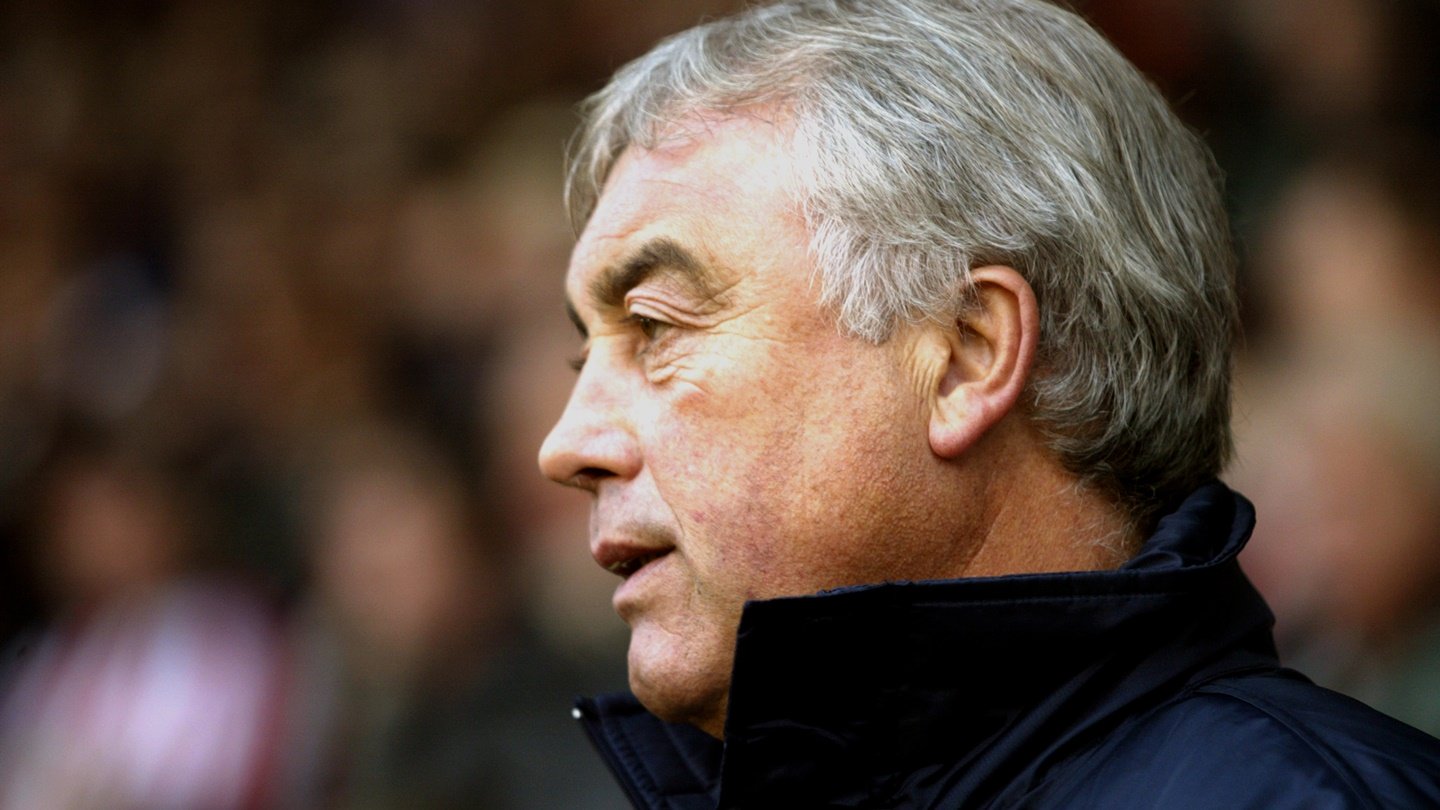 The 1999/2000 season went right to the wire before, on the very last day of the season, Burnley won promotion back to the First Division by dramatically beating Scunthorpe United 2-1 at Glanford Park.

In February 2000, Burnley made one of the biggest signings in their illustrious history, securing the services of prolific former England and Arsenal goal scorer Ian Wright, who signed on a free transfer from Glasgow Celtic until the end of the season, when he eventually retired from the game.

Ian Wright runs out for his Burnley debut 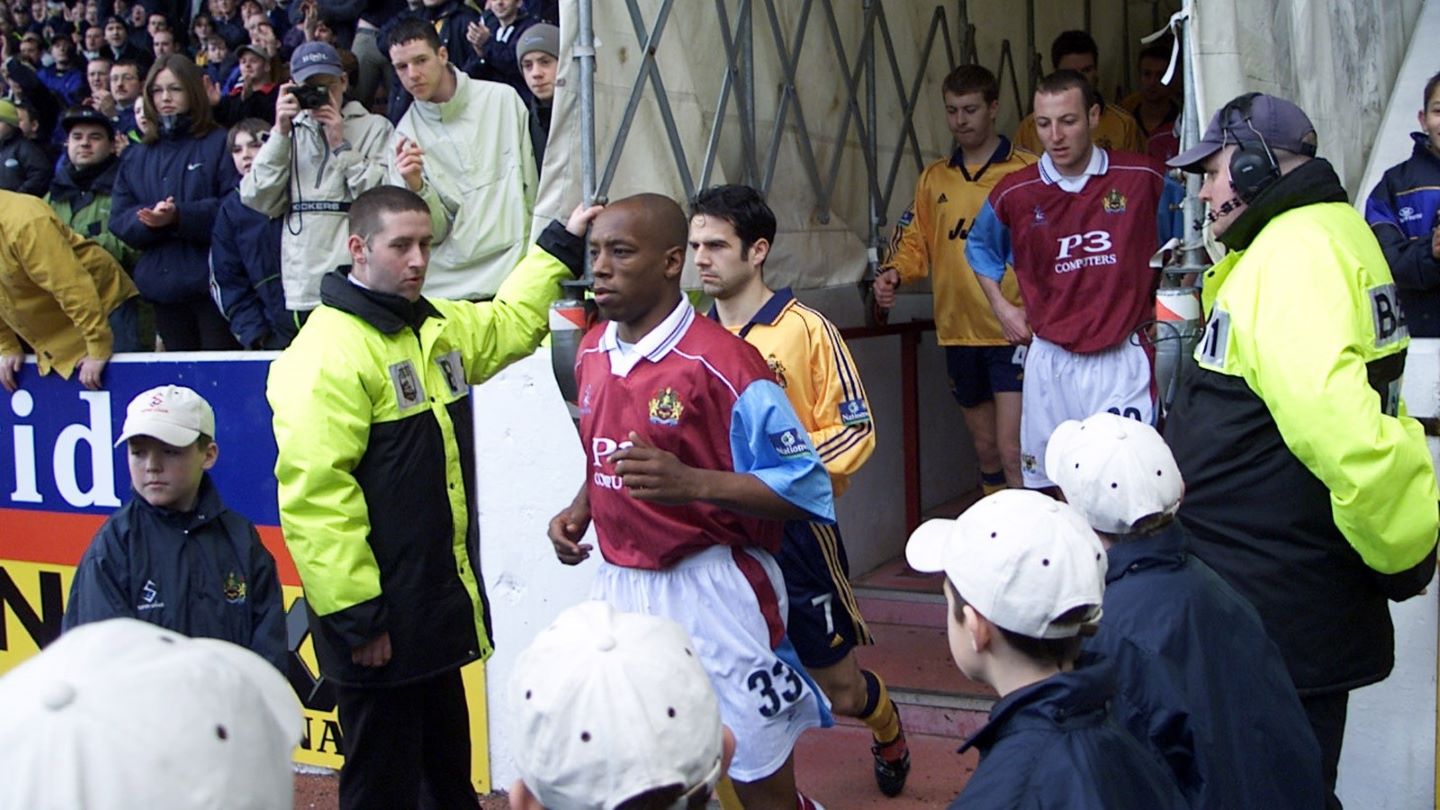 The ensuing 2000/2001 campaign saw the Clarets hold their own in the First Division, while the club also marked another milestone when Stockport County striker Ian Moore became their first £1m signing.

Ternent's eventful reign at Turf Moor finally came to an end in the summer of 2004, when the club decided not to offer him a new contract.

And after weeks of fevered speculation, Steve Cotterill succeeded Ternent in June 2004. One of the highlights of the former Cheltenham Town manager's reign as Burnley boss was the 1-0 victory over soon-to-be-crowned European Champions Liverpool in the FA Cup in January 2005.

Yet the forced sale of many of the club's top goal scorers consistently saw the goals dry-up and, following a dismal 19-game winless run the previous season, in 2007/08 the club finally parted terms with Cotterill.

The front-runner to replace him was Owen Coyle, who in the previous two seasons led Scottish side St Johnstone to both the Scottish League Cup and Scottish Cup semi-finals respectively.

In November 2007, Coyle was finally named as the new Burnley manager. It was to be a momentous appointment!

The Scot led the club to a mid-table finish just three wins short of the play-offs in his first campaign and the future looked prosperous.

And in May 2009, following a magnificent League Cup run that took the Clarets to within minutes of a dream final, dreams were fulfilled as Burnley achieved promotion to the Premier League for the first time.

Fittingly, it came at Wembley as Wade Elliott's wonder goal earned a stunning 1-0 win over Sheffield United in the Championship Play-Off Final to finally end the Clarets' 33-year exile from the top flight. 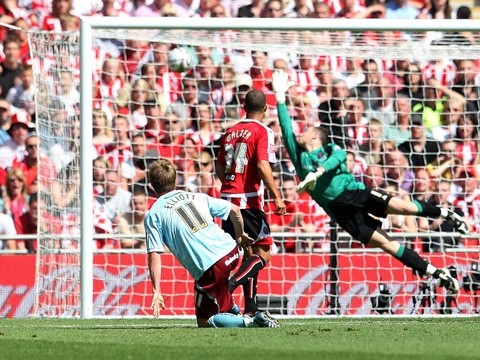 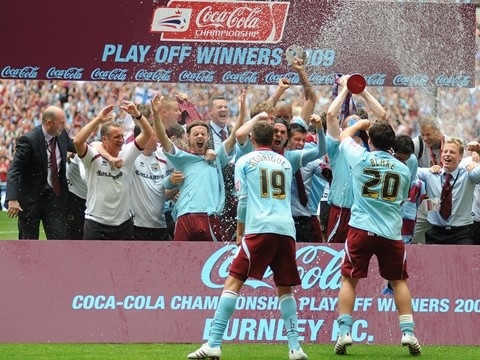 The Premier League adventure began in sensational style with a 1-0 win over reigning champions Manchester United at Turf Moor; Robbie Blake having the honour of scoring the club's first ever Premier League goal.

But despite a bright start - four successive home victories raising expectations - a bombshell hit the club in mid-season when Coyle, who had masterminded the incredible rise, was lured to Bolton Wanderers as manager.

Former Burnley defender Brian Laws was installed as Coyle's successor, but was unable to halt the tailspin and Burnley, who ended the season in 18th place, were relegated back to the Championship.

And following an inauspicious opening half of the 2010/11 campaign, Laws was dismissed in January 2011 to be replaced by former Bournemouth boss Eddie Howe, who guided Burnley to an eighth-place finish in the Championship in the 2011/12 championship campaign.

Howe left the club in October 2012, returning to Bournemouth for family reasons, and was replaced by Sean Dyche, whose reign would reinvigorate the club and provide riches beyond the club's wildest dreams!

The new man at the helm steered the club to a very respectable 11th place finish at the end of another turbulent season.

The following campaign, however, marked another important milestone for the club as Dyche steered the club back into the Premier League, losing just five games and setting new records galore, en-route to a record points total for a team finishing second.

Sean Dyche steers Burnley back into the Premier League 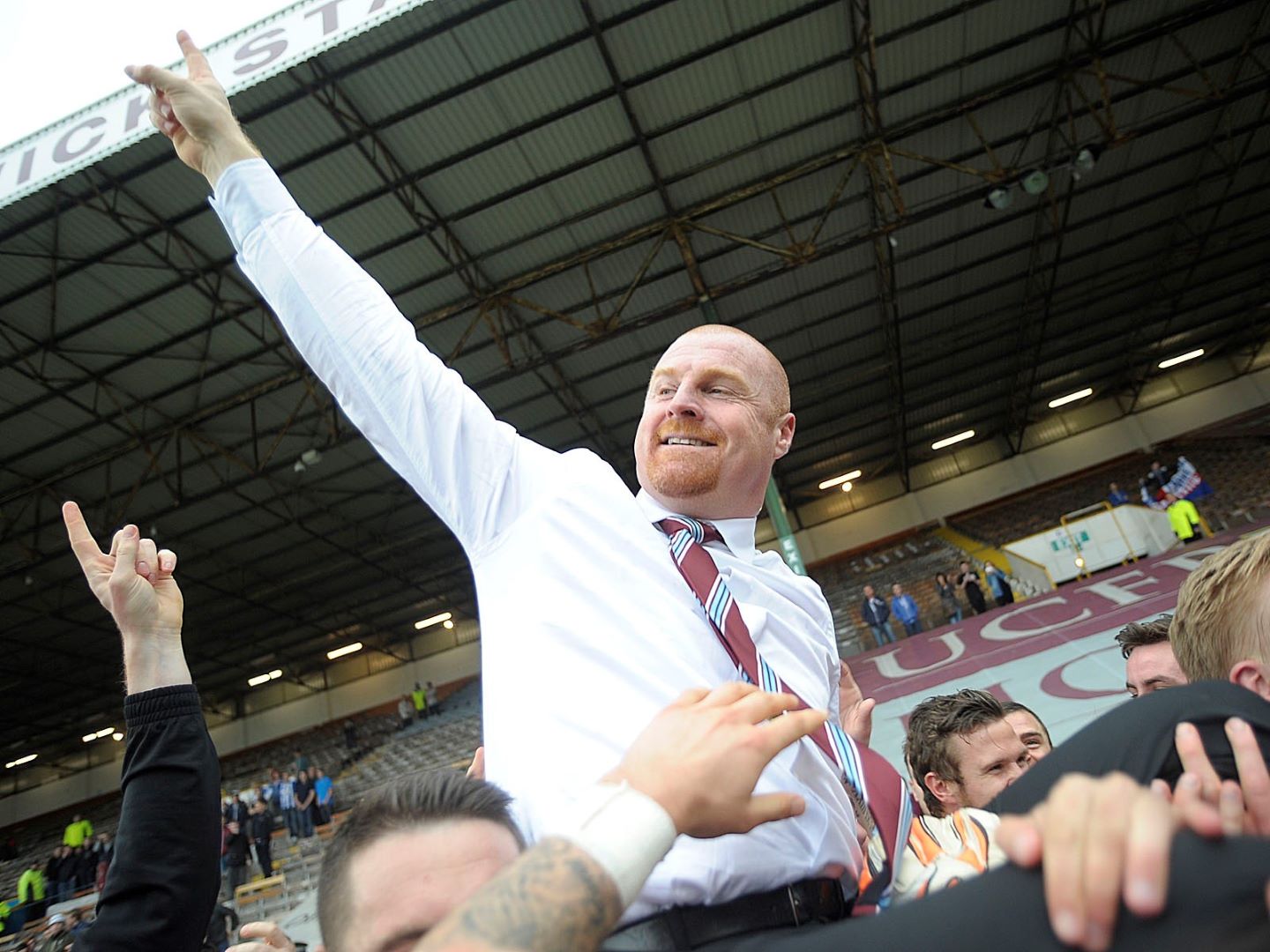 Frustratingly, another season in the top flight would last just 12 months.

But with the riches of Premier League football ensuring financial stability - and the club having taken back ownership of the famous Turf Moor stadium and training facility - the future for the club was again looking rosy.

And after just one year back in the Championship, a return to the Premier League by winning the title coincided with the biggest financial rewards the club had ever seen. 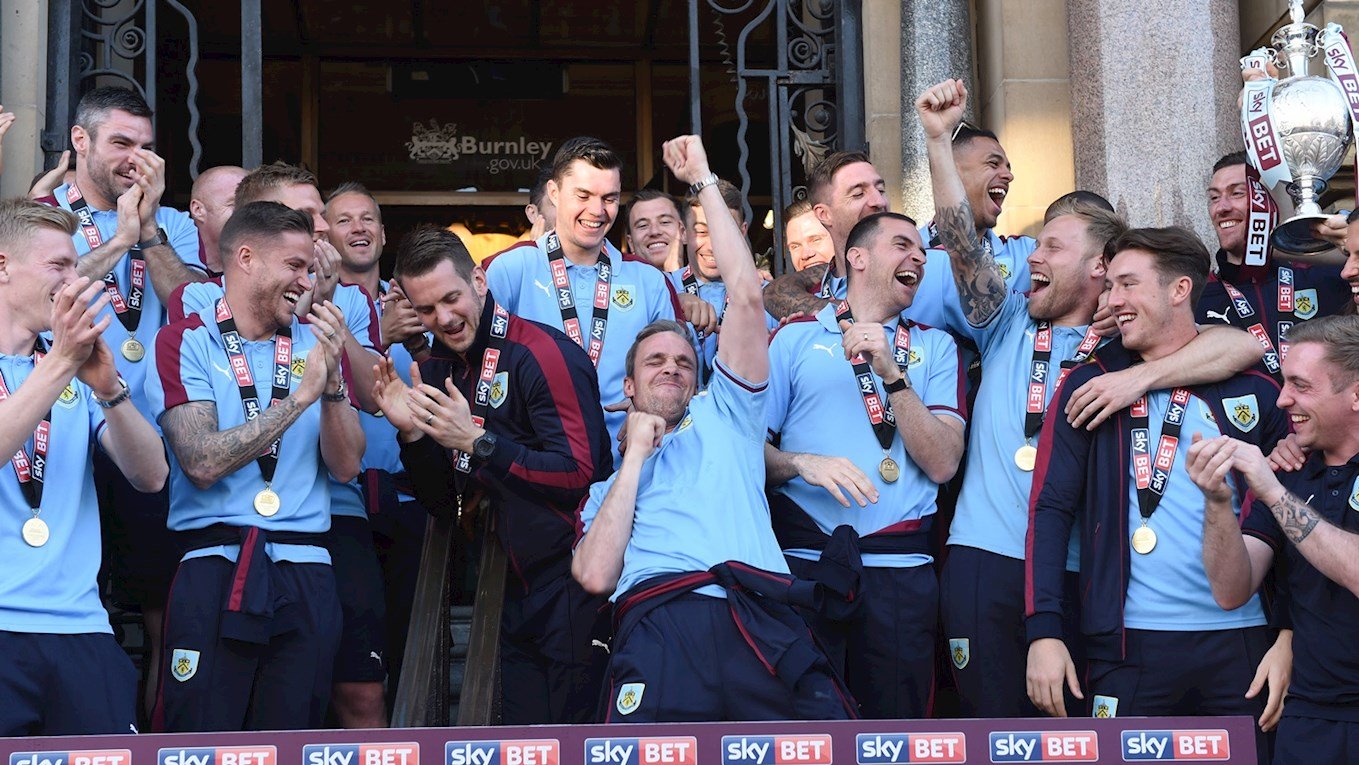 Dyche's side again lost just five games in their charge to the summit, in turn earning a reported £100m for top flight clubs following a new TV deal for UK and international screening rights.

Financial troubles were now firmly in the past. And within a year, the club had created modern history by maintaining their top-flight status for the first time since the mid 1970s.

Dyche's side won 10 times at home to comfortably preserve their Premier League place and take the club forwards into a brave new era.

This would be enhanced by the completion of a magnificent new £10.6m training base at Gawthorpe, grandly named the Barnfield Training Centre. This represented the first major enhancement of the club's training ground since its implementation as one of the first in the country in the 1950s, during former Chairman Bob Lord's reign. 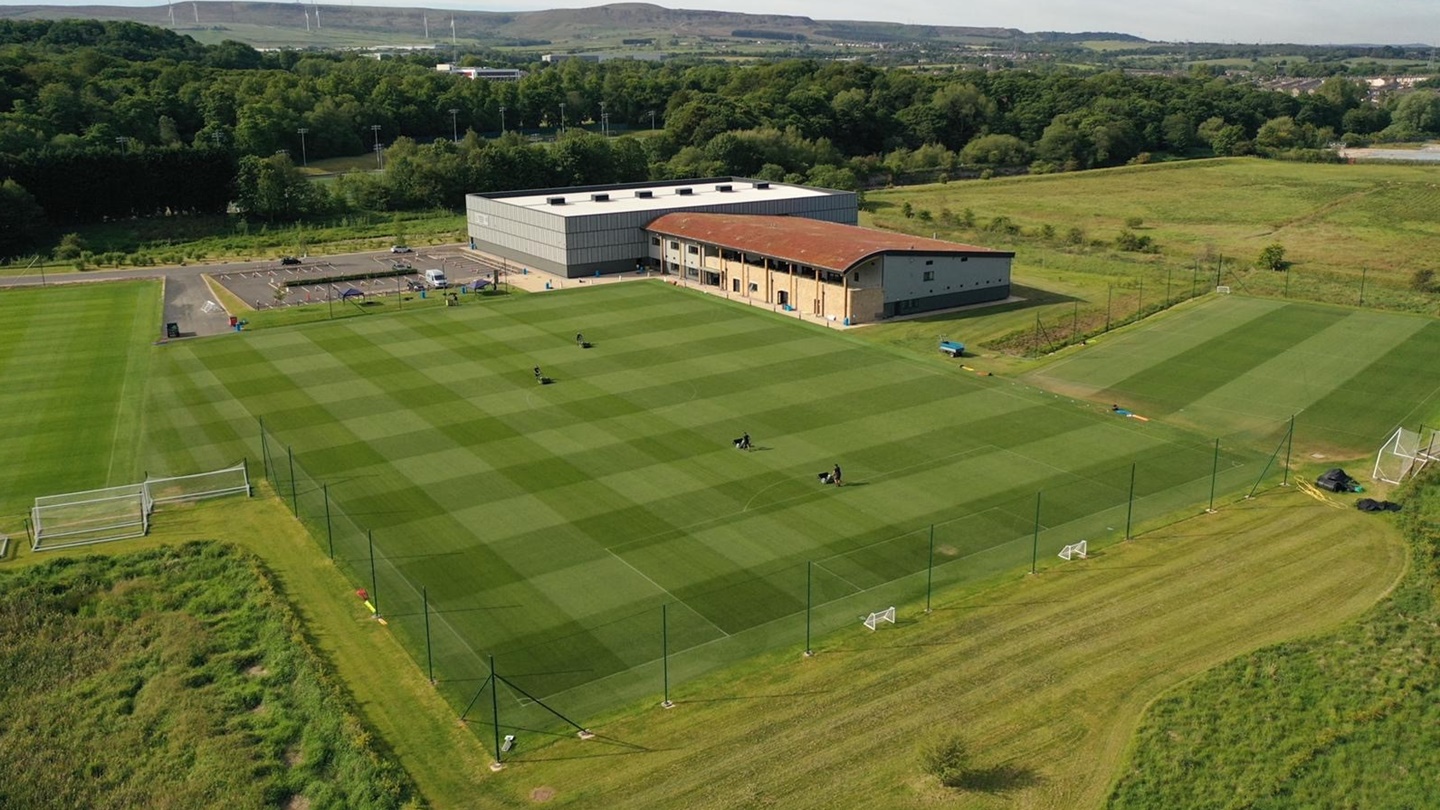