Clarets fall to defeat at the Etihad

Burnley fell to a narrow defeat at Manchester City despite a battling performance after a goal in each half at the Etihad Stadium.

The visitors produced a spirited performance and created a number of decent opportunities but were made to pay by the clinical finishing of their opponents.

Bernardo Silva fired in an early opener, before Kevin de Bruyne took the game away from the Clarets with the second goal with just 20 minutes to play.

The decisive blow was a little harsh, considering Burnley could have had a free-kick for a possible foul on midfielder Jack Cork in the build-up.

Play continued and only seconds later De Bruyne gave Nick Pope no chance, all but ending the Clarets realistic chances of bringing points back to Turf Moor.

However, manager Sean Dyche can be pleased with elements of his team’s performance, although the wait for a first Premier League win of the season goes on.

It was always going to be a tough ask away from home against the reigning Premier League champions, but the Clarets matched Pep Guardiola’s team for long periods. 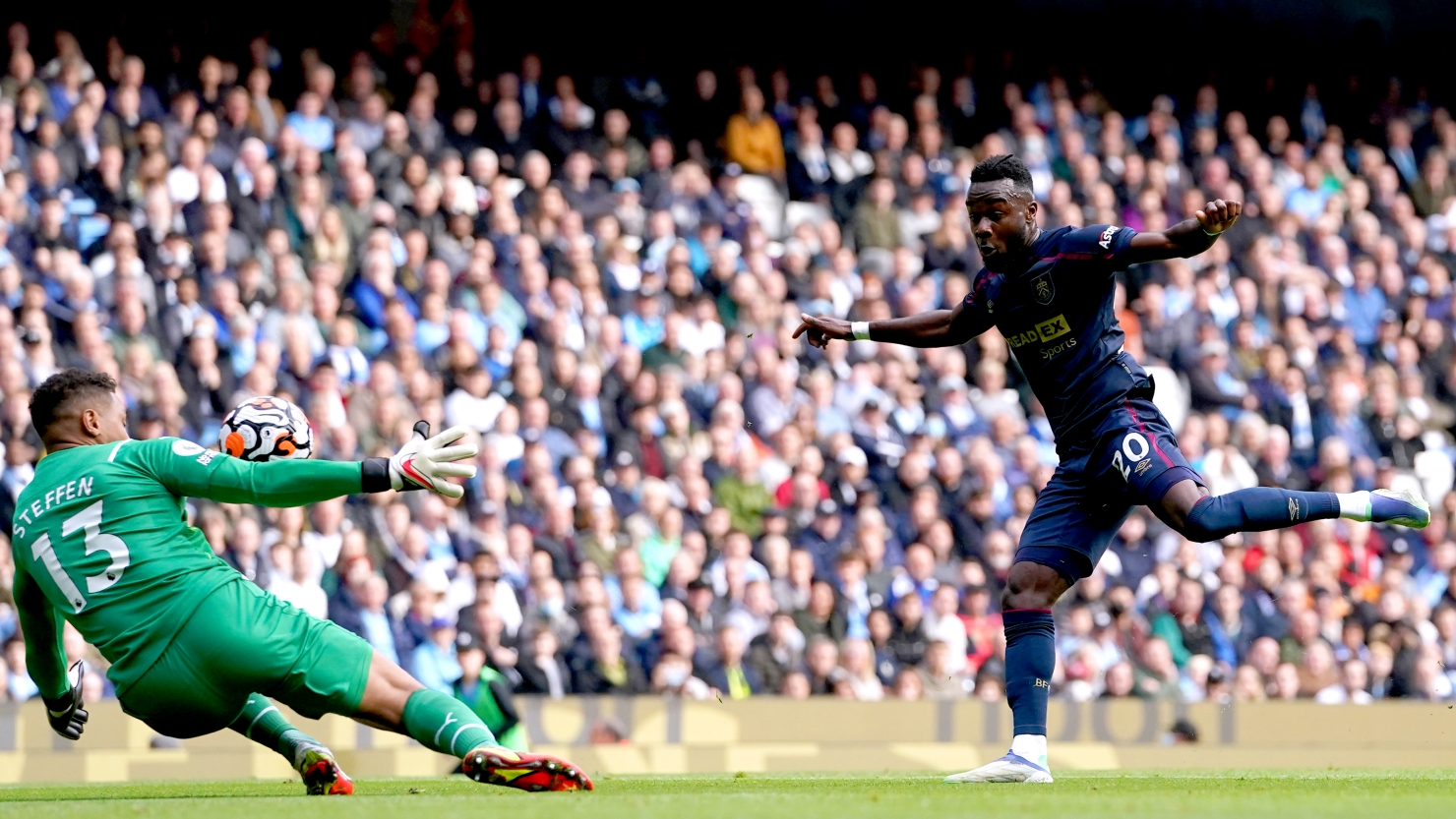 Clad in the new dark third changed strip, Burnley made a positive start in Manchester. Dyche had reinforced his midfield bringing Jack Cork back into the fold, and the industrious midfielder helped the Clarets looked assured in the opening stages.

However, just as the visitors looked like they were settling in nicely, Silva fired past Pope in the 12th minute with the first real chance of the game, to leave Burnley with an uphill task.

One bright spot in the opening 45 minutes was the returning Maxwel Cornet, back in the starting XI after injury.

The summer signing from Lyon once again proved a real threat for to the opposition backline, and nearly levelled after breaking the offside trap, his first effort saved and his second curled over the top.

Josh Brownhill also fired a shot just wide after more excellent play from Cork, as the Clarets pushed for a first half equaliser.

At the other end Silva nearly had his second but fired over Pope’s goal after getting past Nathan Collins.

Phil Foden went close to chipping England colleague Pope, but the Clarets number one stood tall to keep his team in the game.

Substitute Ashley Barnes very nearly made an immediate impact after replacing Cornet, but fired straight at Zack Steffan in the City goal when inside the penalty area. 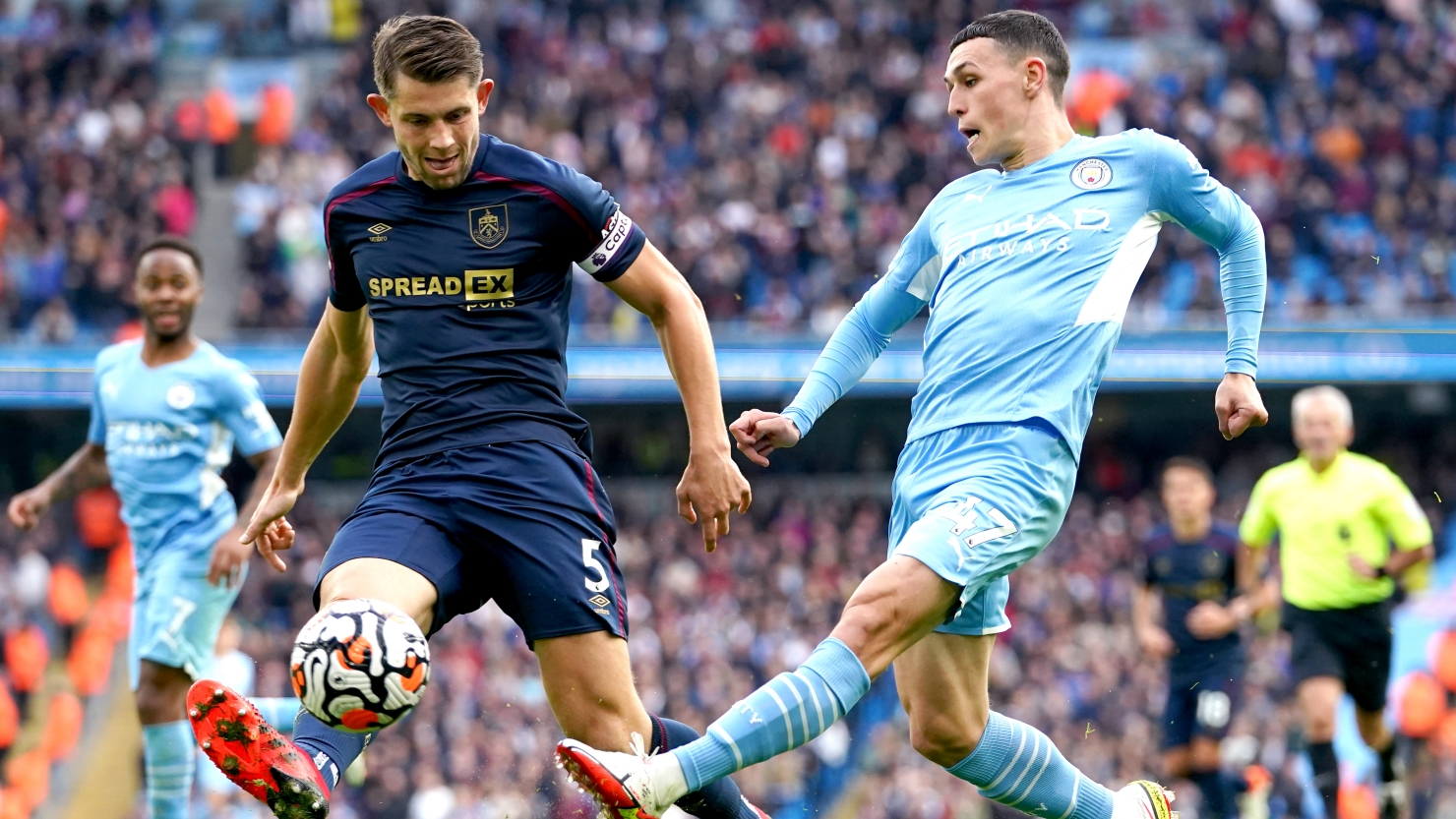 Even after Pep Guardiola’s team got their second through De Bruyne, Burnley kept going and Barnes curled a clever effort just wide of the goal frame with the keeper left rooted.

Chris Wood also had a big chance to half the deficit but blazed over from just a few yards out.

In the end Dyche’s side couldn’t get themselves on the scoresheet, the game finishing 2-0 and keeping the Clarets 19th in the table.

The wait for a first league win of the campaign goes on, with Sean Dyche’s team back on the road next Saturday when they travel to Southampton.