The Clarets were denied any festive cheer on a controversial afternoon in West Yorkshire.

But Sean Dyche’s men could feel aggrieved at the way in which the first top-flight meeting between the two old rivals since 1976 ended in the Yorkshiremen’s favour.

Bamford was arguably fortunate to be given the spot-kick after goalkeeper Nick Pope beat him to a through-ball before catching United’s top scorer. 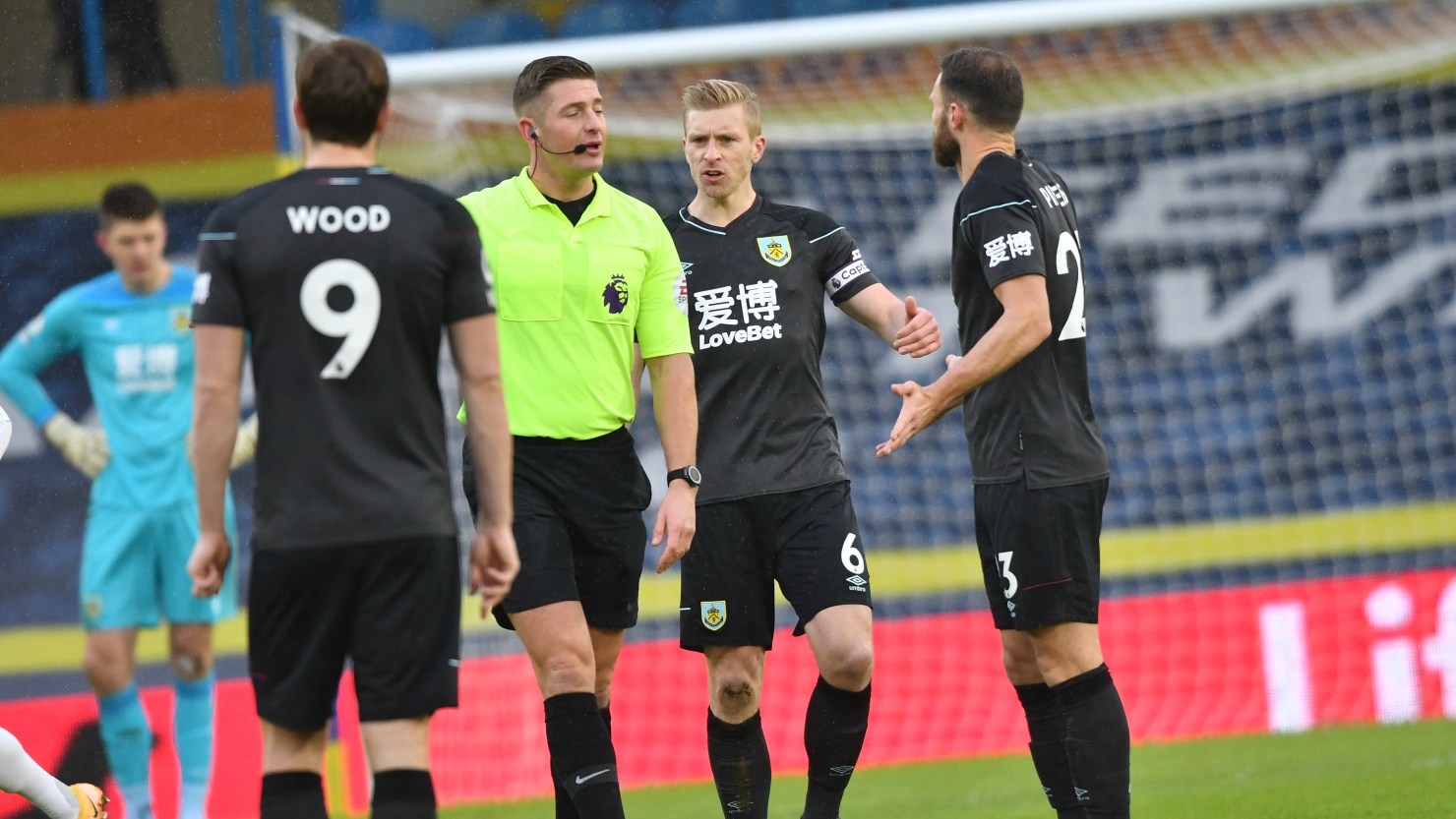 And then at the other end, the Clarets were denied an equaliser and a potential spot-kick of their own after Ashley Barnes had the ball in the net.

Burnley then completely dominated the second half but couldn’t force an equaliser from a handful of openings as they were forced to swallow a frustrating second away defeat in six games to slow their progress away from the bottom three.

Leeds, who started the day just one spot above the 16th-placed Clarets, had conceded the most goals in the top division in their hit-and-miss start to their first season back in the Premier League for 16 years.

But it was the Clarets’ back line that looked uncharacteristically unsure in the opening stages. 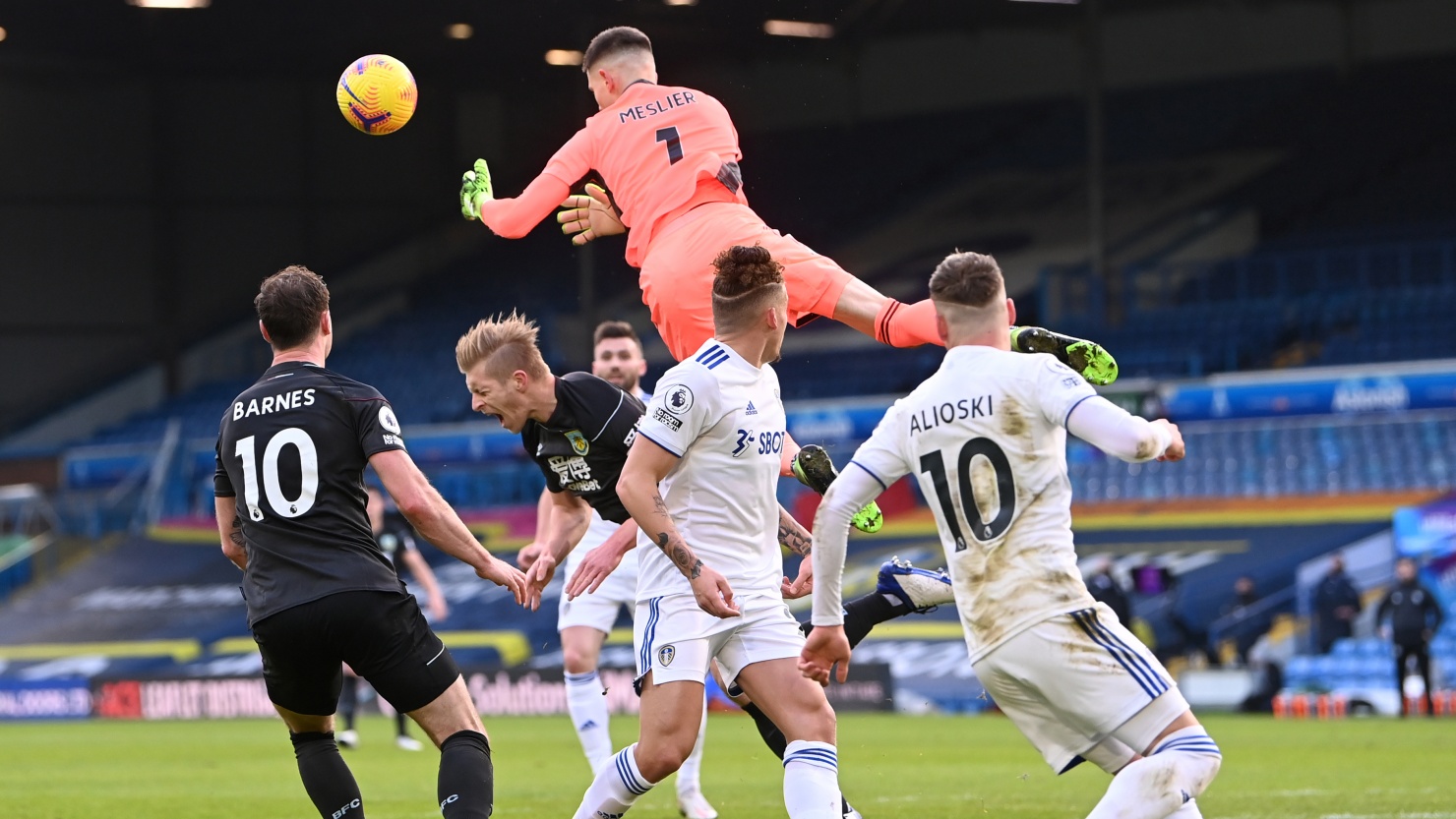 That said, the first time they were caught out by Luke Ayling’s ball over the top Pope could claim to have come to the rescue.

The Clarets’ keeper looked as though his outstretched leg had taken the ball away from Bamford before colliding with the Leeds’ striker.

But referee Robert Jones saw it the other way and with no over-rule from VAR, Bamford – who didn’t manage a goal in his loan spell at Turf Moor four years ago – was allowed to stroke home the spot-kick to move into double figures for the season.

If the Clarets thought they were on a rough end of a decision there, they were even more unfortunate to have what would have been an equaliser ruled out nearly a quarter of an hour later.

Ben Mee was barged in the back by Leeds goalkeeper Illan Meslier, who dropped Ashley Westwood’s free-kick at the feet of Ashley Barnes, who swivelled and sent an excellent first-time strike into the net. 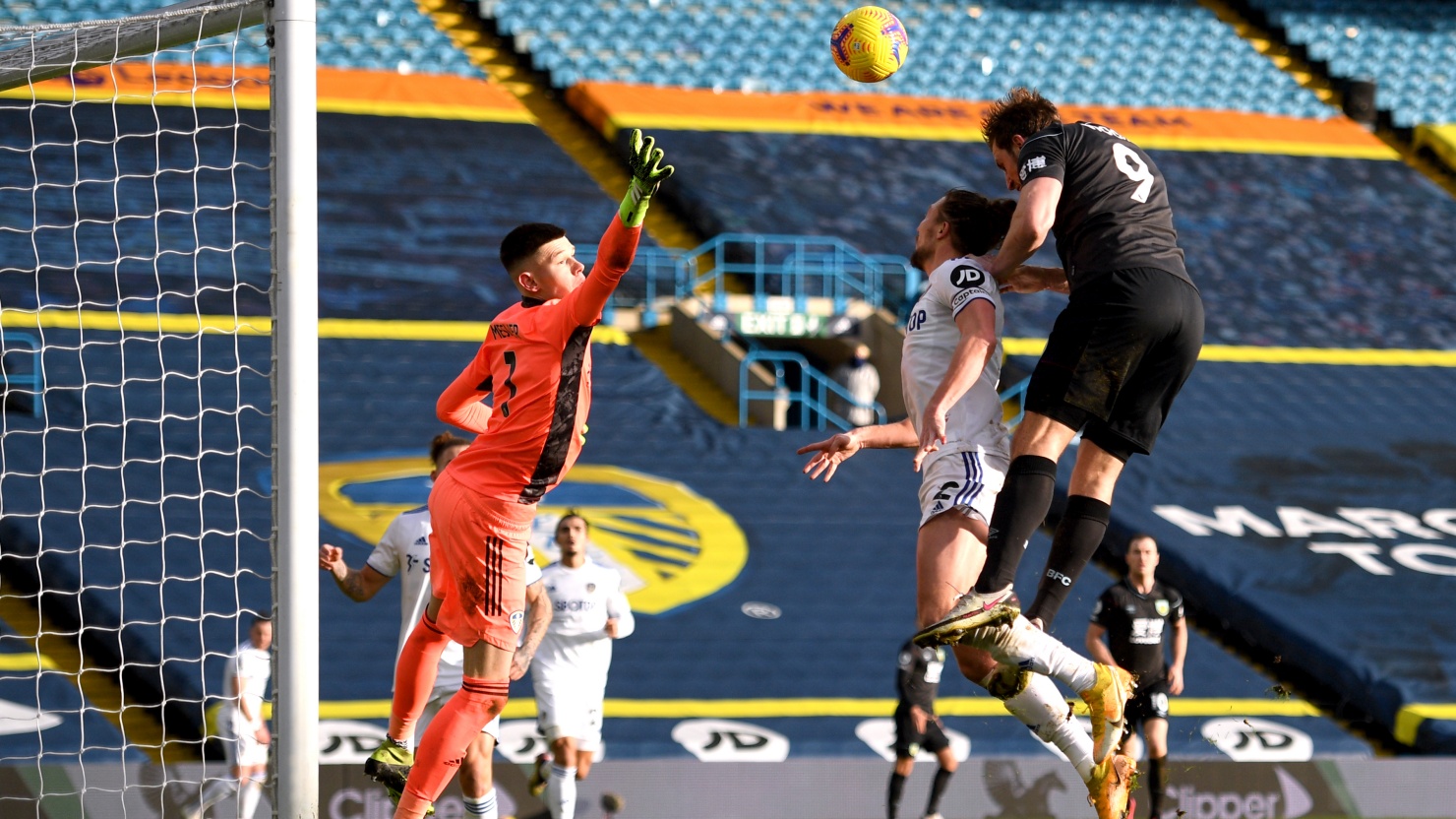 However, Jones had already penalised Mee, when the Clarets could have had legitimate claims on the goal or a penalty for the challenge on their skipper.

Former Leeds striker Chris Wood also went close to a leveller when he headed an excellent cross from Ashley Westwood just over the top under pressure at the far post from Ayling.

But the home side also had chances with the Clarets not helping their cause with some sloppy play at the back with Mee unusually at fault on a couple of occasions.

From one under-hit pass Raphina teed up Jack Harrison for a shot that was goal-bound until hitting team-mate Bamford.

And Raphina then forced Pope into a save after another long, angled pass was allowed to reach the Brazilian midfielder. 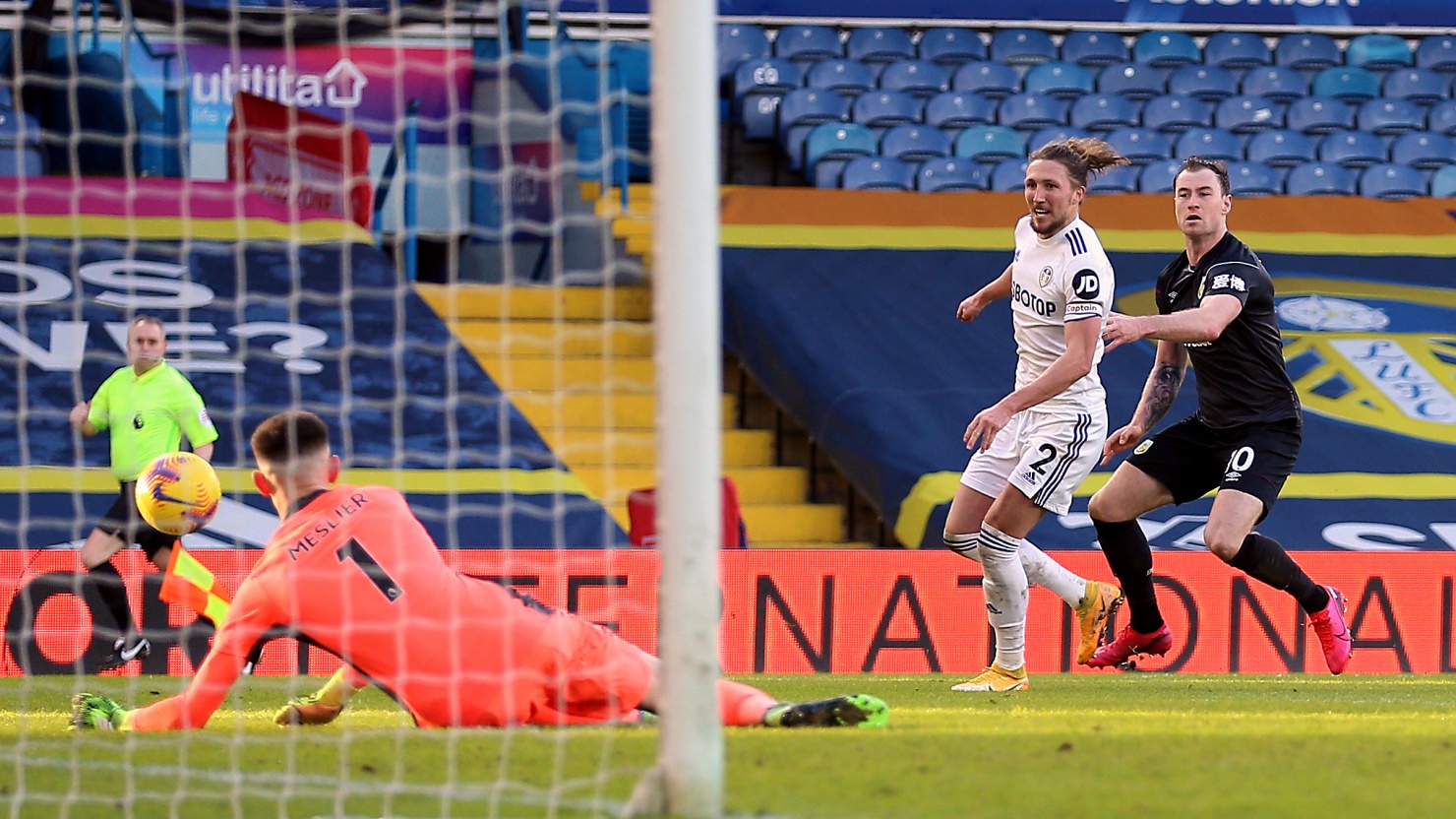 The Clarets’ attacking options were limited with neither Robbie Brady or Dwight McNeil shaking off knocks to retain their places from last Monday night’s win over Wolves and add to the threat from wide positions.

It was the first time in over two years that McNeil was not involved in a Premier League fixture, with the 21-year-old starting every top-flight game bar one for the Clarets since the end of December, 2018.

Josh Benson and Erik Pieters – playing his 200th Premier League game – plugged the gaps and did their bit to keep the Clarets in the contest.

And with Burnley just one goal behind that was very much the case as Dyche’s men started the second half virtually camped in the Leeds’ half.

Matt Lowton looked for his first Premier League goal for the Clarets with a low strike gathered by Meslier, while Brownhill twice tried his luck from long range and Westwood delivered a couple of teasing balls into the box that just eluded Wood. 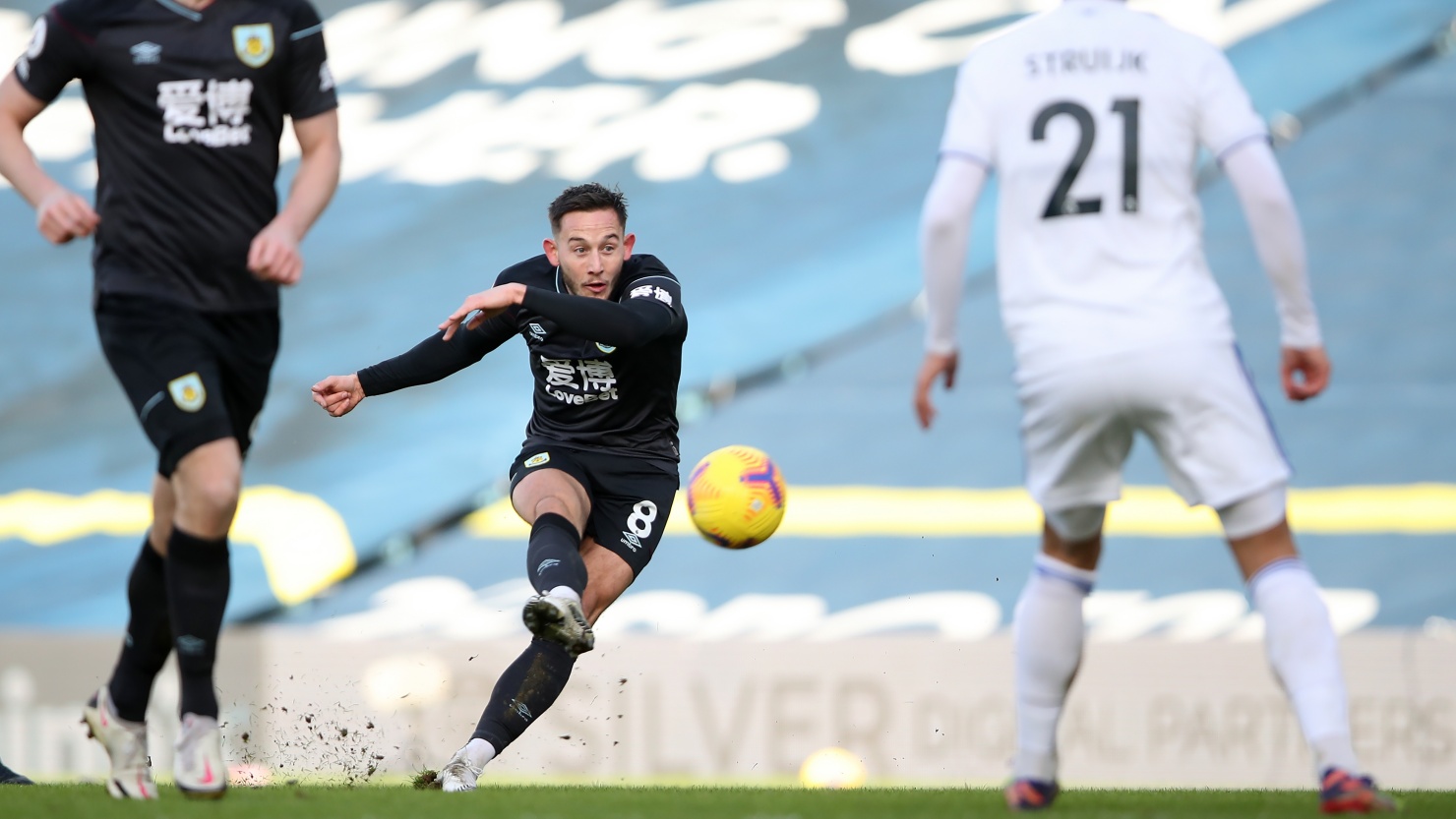 Leeds hadn’t mustered an attack since half-time but with 20 minutes to go they almost grabbed a second goal on the break to potentially put themselves in safe water.

Substitute Pablo Hernandez burst from half-way and it took an excellent save from Pope at full stretch to stop the Spain international from finding the bottom corner.

That was brief respite for the hosts, however, with the Clarets quickly back on the ascendency with Barnes testing Meslier at his near post as they kept pressing for an equaliser.

Dyche sent on Dale Stephens and Jay Rodriguez to lend further weight to the attempted comeback and Rodriguez had a sight of goal inside the last 10 minutes with an angled volley he flashed over the top.

The Clarets kept probing as they dominated possession and another fine move ended with a Barnes strike Meslier again palmed away at his near post.

And in the closing moments it was total bombardment of the Leeds’ goal with even Pope joining in the ultimately unsuccessful attempt to salvage a deserved reward.