Buoyant Burnley scored three second-half goals in a stunning fightback that made it a hat-trick of wins for Sean Dyche’s cock-a-hoop Clarets.

Trailing at half-time and fortunate to be only one goal adrift, the Clarets turned their fortunes around with a superb second-half performance which twice saw them come from behind.

Villa had won every game in which they had taken the taken the lead in the Premier League so far this season.

But that record was broken as Dyche’s men backed up their triumph at champions Liverpool last mid-week to secure successive league wins for the first time since June to sit clear in 15th place in the table. 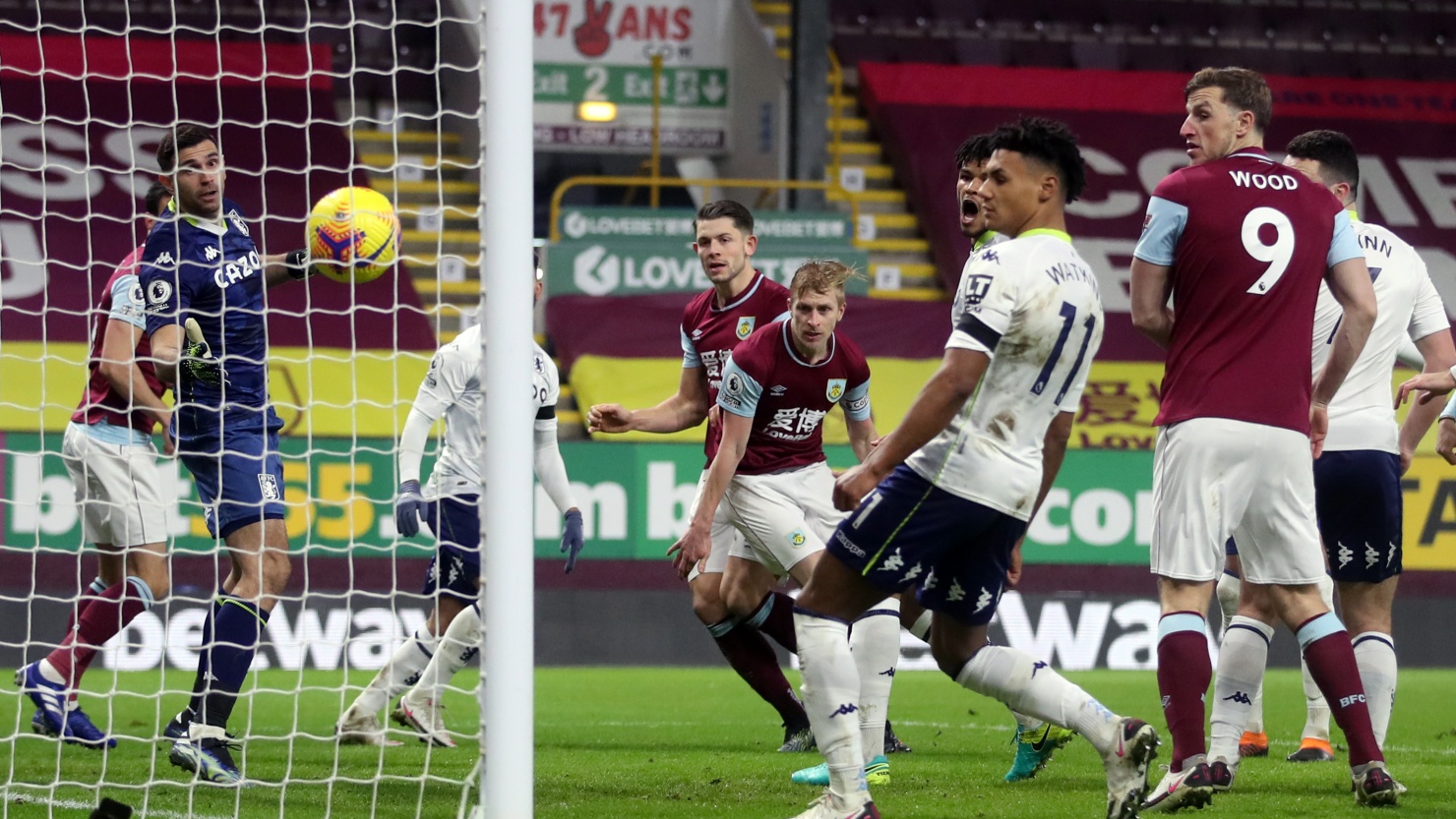 Ben Mee headed the first equaliser with his second goal in five games, having previously gone 76 games between goals at Turf Moor.

Then after Jack Grealish had restored Villa’s lead, two goals in four dramatic minutes swung the game back Burnley’s way as a breath-taking fightback earned a fifth home win of the season.

Dwight McNeil was a central character, scoring the first and then crossing for Chris Wood to head a brilliant winner fitting of a pulsating encounter which perfectly underlined the Clarets’ never-say-die spirit and burgeoning belief.

The two sides had met just six weeks previously when neither side could find a goal at Villa Park. 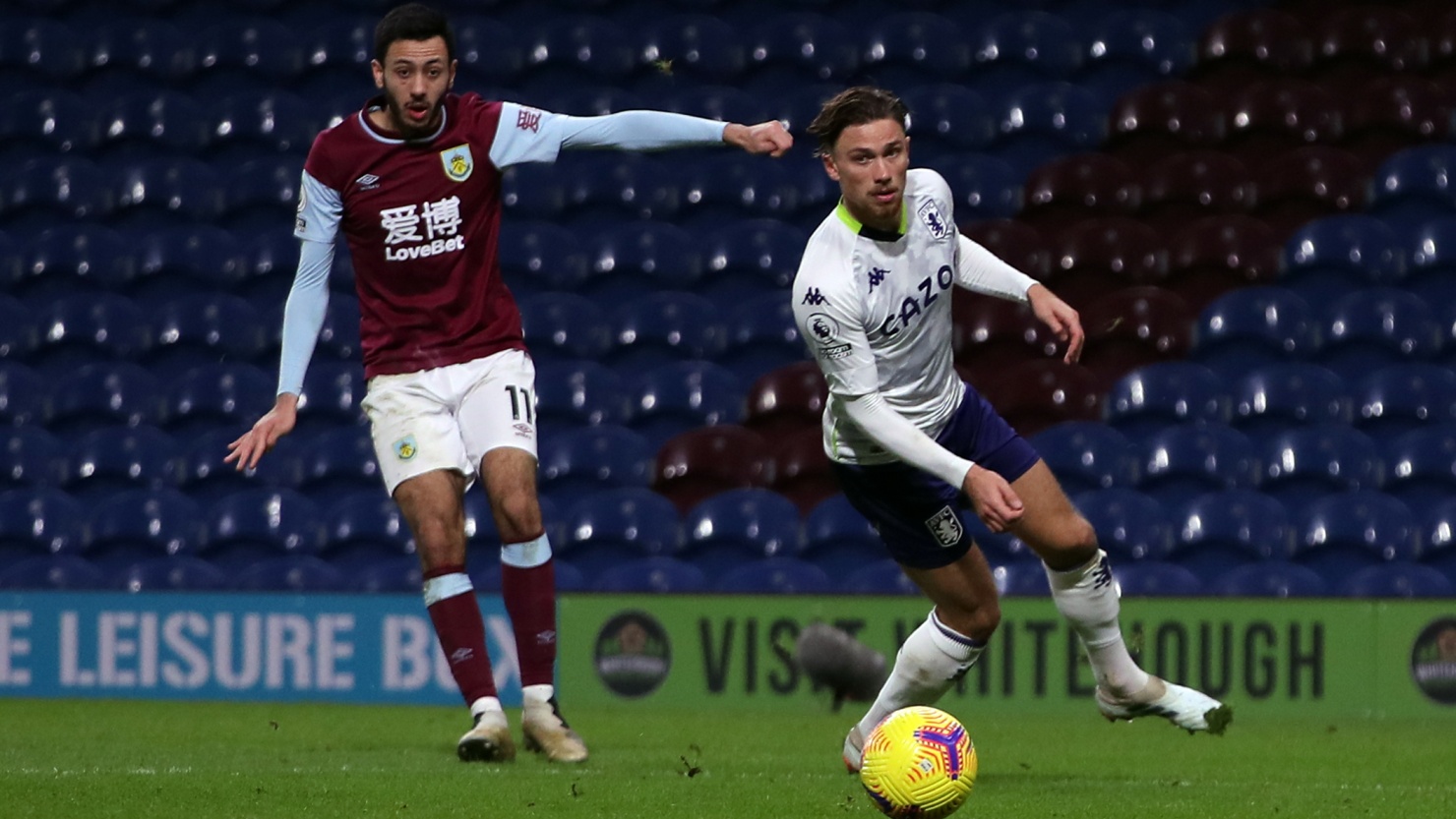 But it took just 14 minutes of the return for Villa to break the deadlock with a classy opening goal.

Ollie Watkins had just warmed the hands of Clarets’ keeper Nick Pope following a dangerous counter-attack when Villa’s top scorer put the visitors in front as he steered in his 10th goal of the season from Matt Targett’s superb low ball in from the left.

And that was one of just a handful of chances Villa created in a first half that the Clarets were happy to end with only a one-goal deficit.

The passing and movement of the Midlanders reflected a first half of a campaign that had already seen them match the nine league wins they managed all of last season.

The Clarets struggled to get near them and it took another masterful performance from goalkeeper Nick Pope to keep his side in the contest. Pope had frustrated Villa last month and stood in their way again with three big saves in the final five minutes of the opening half. 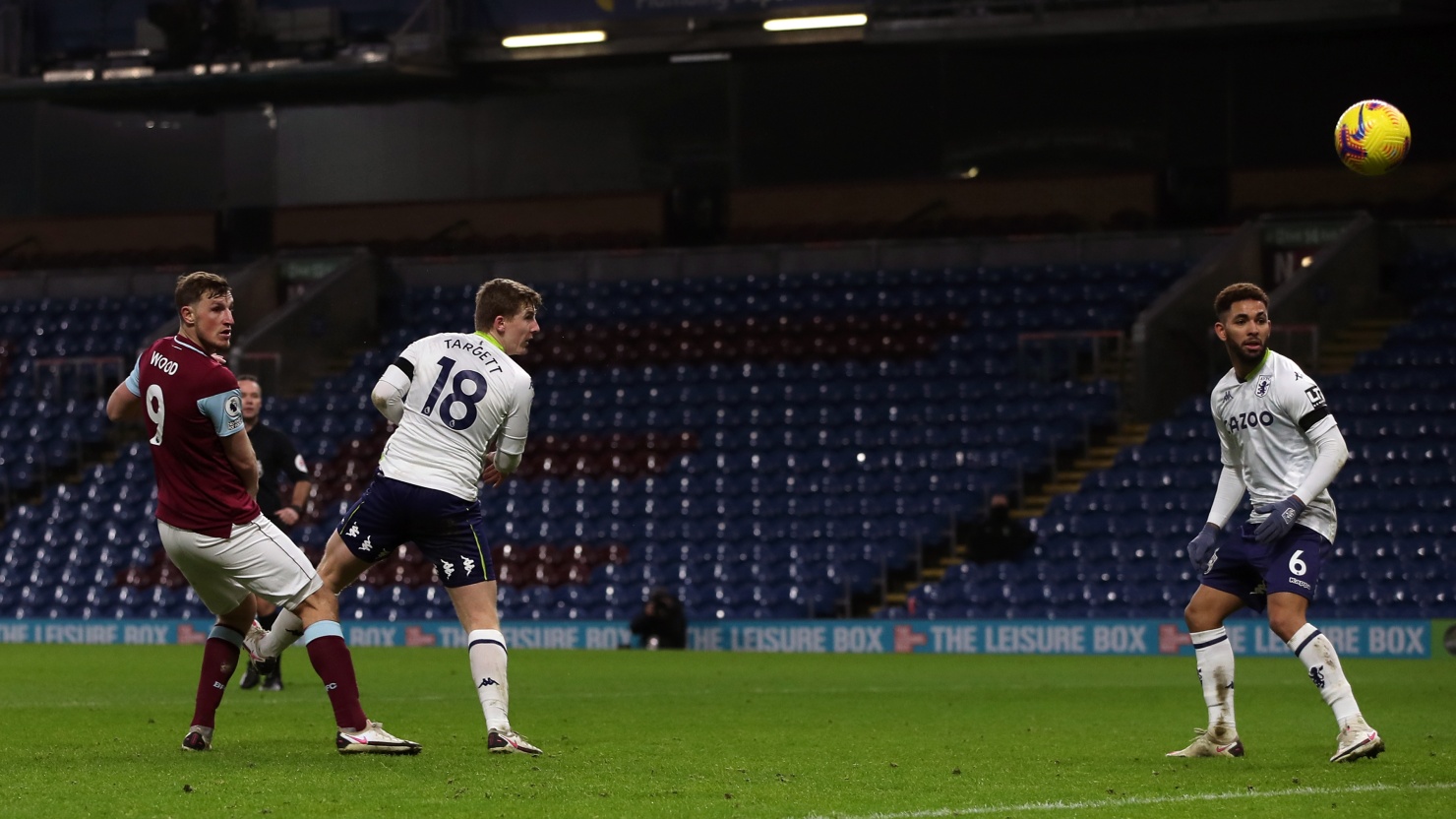 Firstly, he denied Watkins after the Villa striker had got in behind the Clarets’ defence before Ross Barkley volleyed the loose ball against the Burnley bar.

Pope then got down superbly to keep out a shot from England colleague Tyrone Mings and then when Targett again got forward from left-back to let fire, the Burnley number-one stayed strong to beat the ball away.

The Clarets’ strikeforce – missing the injured Ashley Barnes – had little opportunity to offer a response as Burnley were second best.

Dyche made a change at the break with midfielder Jack Cork replacing Josh Brownhill, who picked up a foot injury, to make his first Premier League appearance since June.

And seven minutes into the second half the Clarets were level as they underlined the value of managing to stay in the contest. 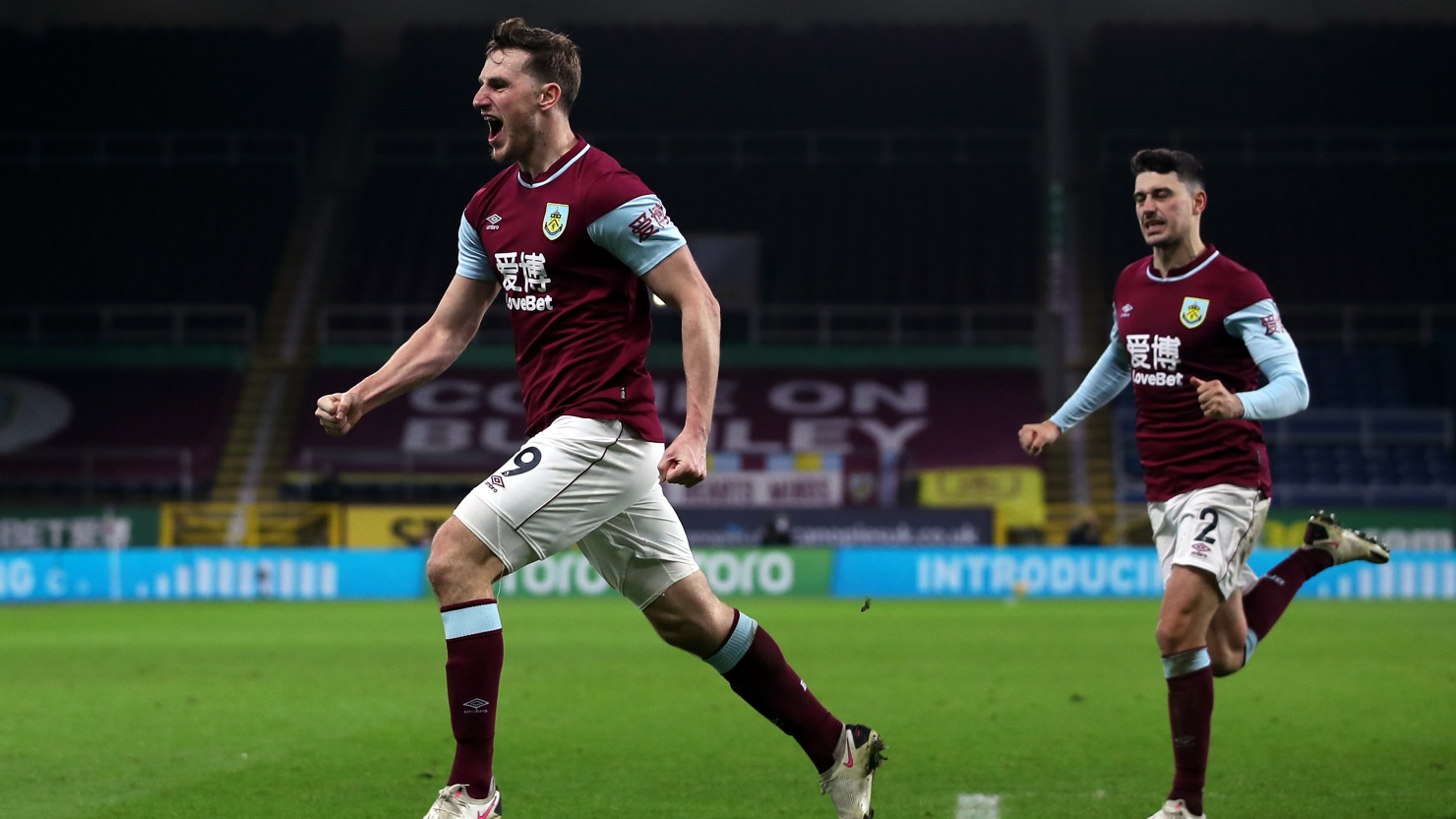 Mee had waited a long time for his last Turf Moor goal but the skipper struck for the second time inside a month with another header from a corner.

This time the delivery came from former Villa midfielder Ashley Westwood and Mee’s powerful far-post header gave Emiliano Martinez no chance as the goalkeeper was denied a 10th clean sheet of the season.

The Clarets were unrecognisable from their first-half performance as they were the ones now forcing the issue, although the threat on the break remained from Villa.

Grealish was again their catalyst and one scintillating run called Pope into action again as he blocked a shot from the Villa skipper after he had burst clear from inside his own half. 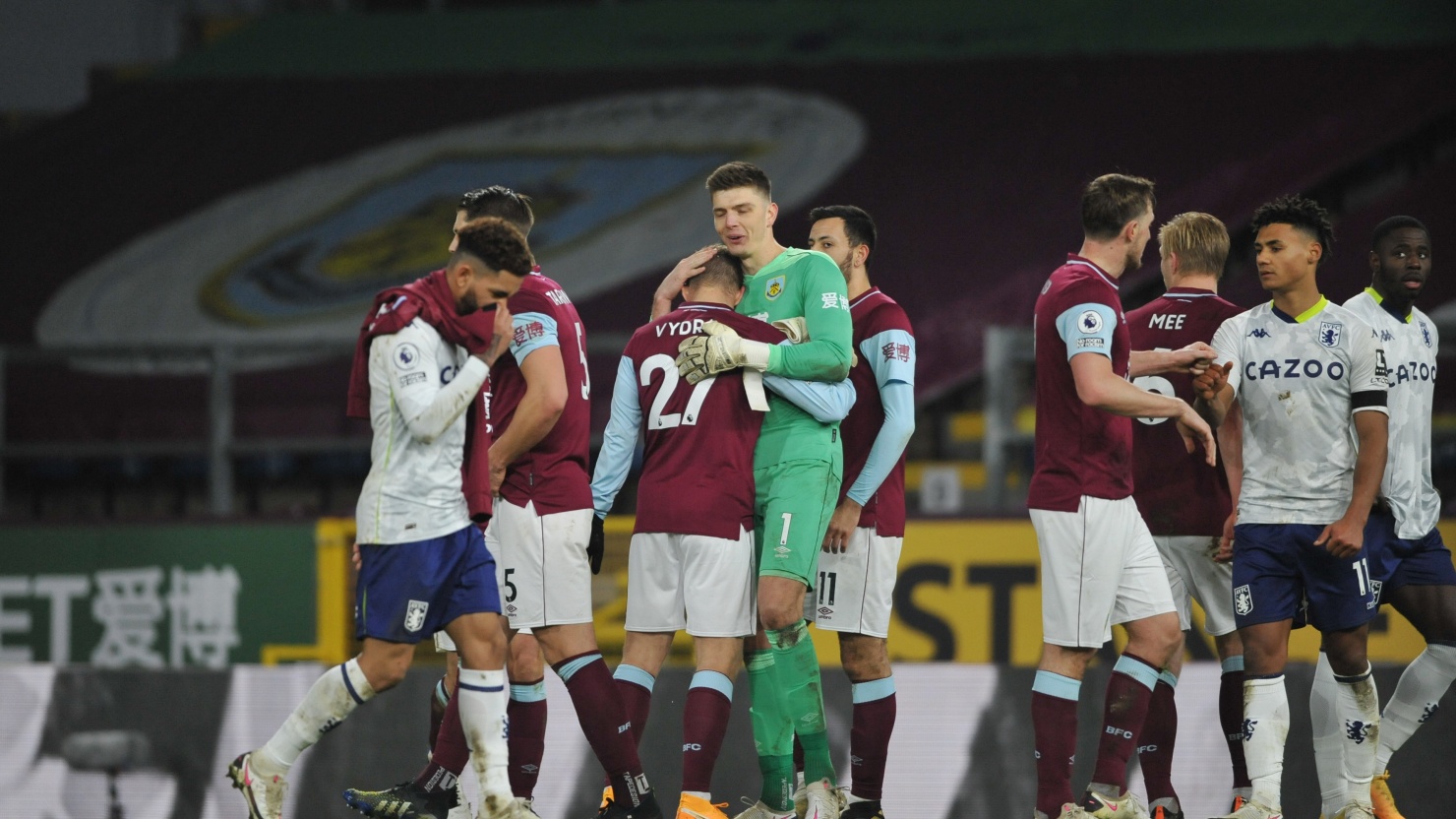 Burnley also went in search of a second goal and it took a superb save from Martinez to deny Wood a fourth goal in five starts against Villa after Erik Pieters had pulled the ball back into the path of the Clarets’ striker.

But it was Villa who landed the next blow and, predictably, it was Grealish who delivered it moments later.

The Midlanders’ talisman played a one-two with Douglas Luiz and this time Pope had no chance of keeping out a first-time finish from 10 yards out.

The Clarets were left with just over 20 minutes to find a response and it took them only eight as they sparked a stunning comeback. 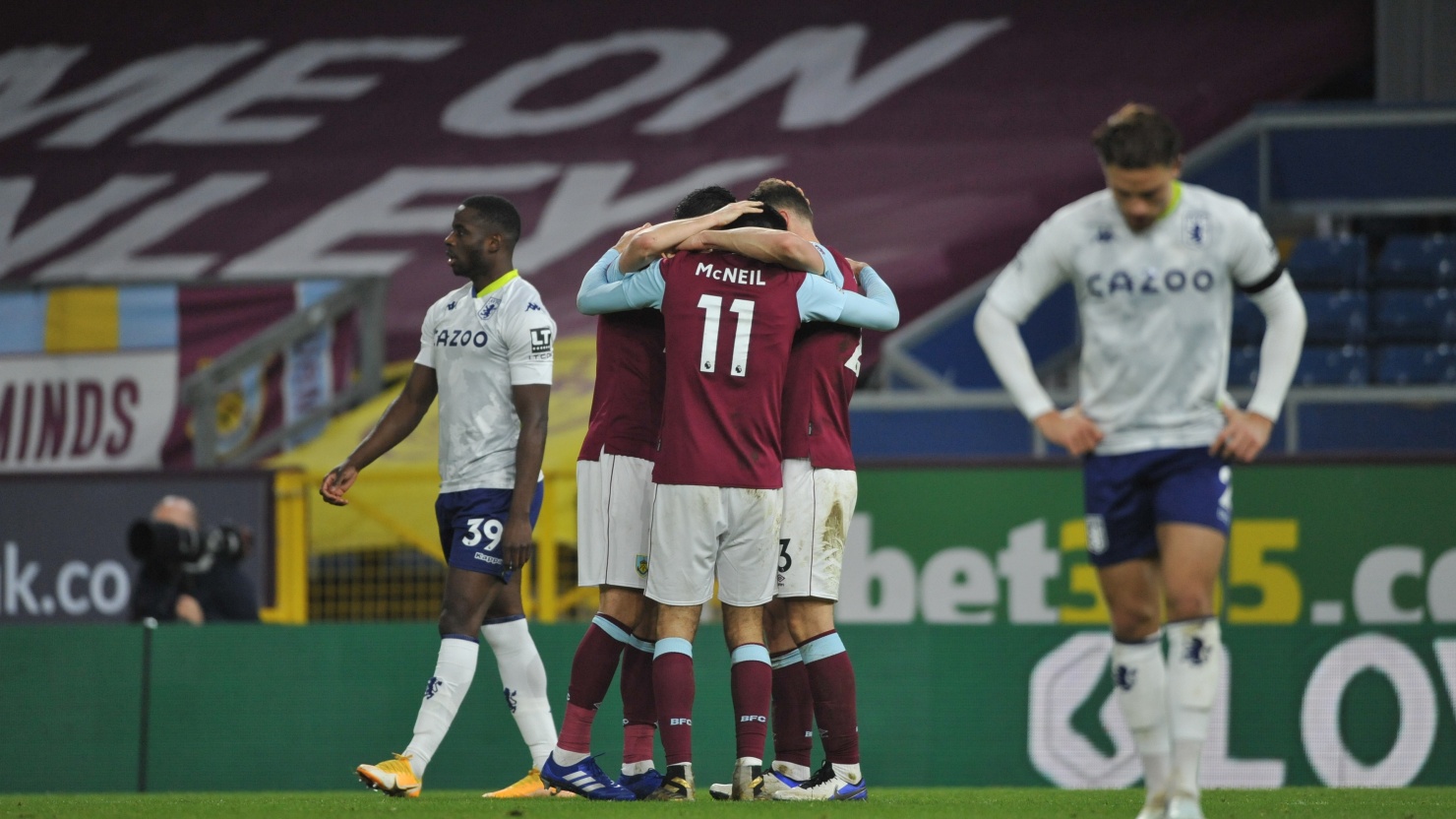 McNeil had been far more prominent in the second half as one of the architects of the Clarets’ recovery and he claimed his first goal of the season to make it 2-2.

Matej Vydra had only just come on and he was one of a clutch of Clarets who looked to meet McNeil’s driven ball in - the on-rushing Pieters getting closest - which eluded all of them and found the far corner.

And McNeil’s artistry on the left wing was apparent again just three minutes as Burnley grabbed the winner and put three goals on the board for the second time in four days following Sunday's FA Cup success at Fulham.

McNeil’s cross was delightfully delivered, although Wood still had plenty to do to direct a fantastic header away from Martinez and into the same corner McNeil had found to claim his fourth goal of the campaign and keep the Clarets looking upwards.