Maxwel Cornet served up another slice of genius to grab Burnley a point and cap a 3-3 Turf Moor thriller against Crystal Palace.

The Ivorian ace rifled home a second-half thunderbolt to level after Ben Mee and Chris Wood had netted for the Clarets in a frantic opening period.

Christian Benteke had given Palace the lead before captain Mee rose highest in the box to crash home from a corner.

Wood temporarily turned the tables but after Benteke struck again to equalise, defender Marc Guehi hauled the Eagles into a half-time lead.

Cornet's rocket sent the crowd into raptures at the start of the second half and despite Matej Vydra coming close to a winner, the Clarets had to settle for a point in a titanic Turf Moor encounter.

Burnley came into the contest off the back of a hard-fought point at Chelsea and unsurprisingly, boss Sean Dyche deployed an unchanged team after that dogged display in the capital.

Vydra – who grabbed the leveller at Stamford Bridge – and Cornet, brimming with confidence after his strike for the Ivory Coast against Mozambique, led the line while

But Patrick Vieira’s visitors came flying out of the blocks and required just eight minutes to seize an early lead.

Burnley were unable to deal with a lofted long ball into the box and when Joachim Andersen found Benteke, the Palace striker fired in off a Nick Pope post. 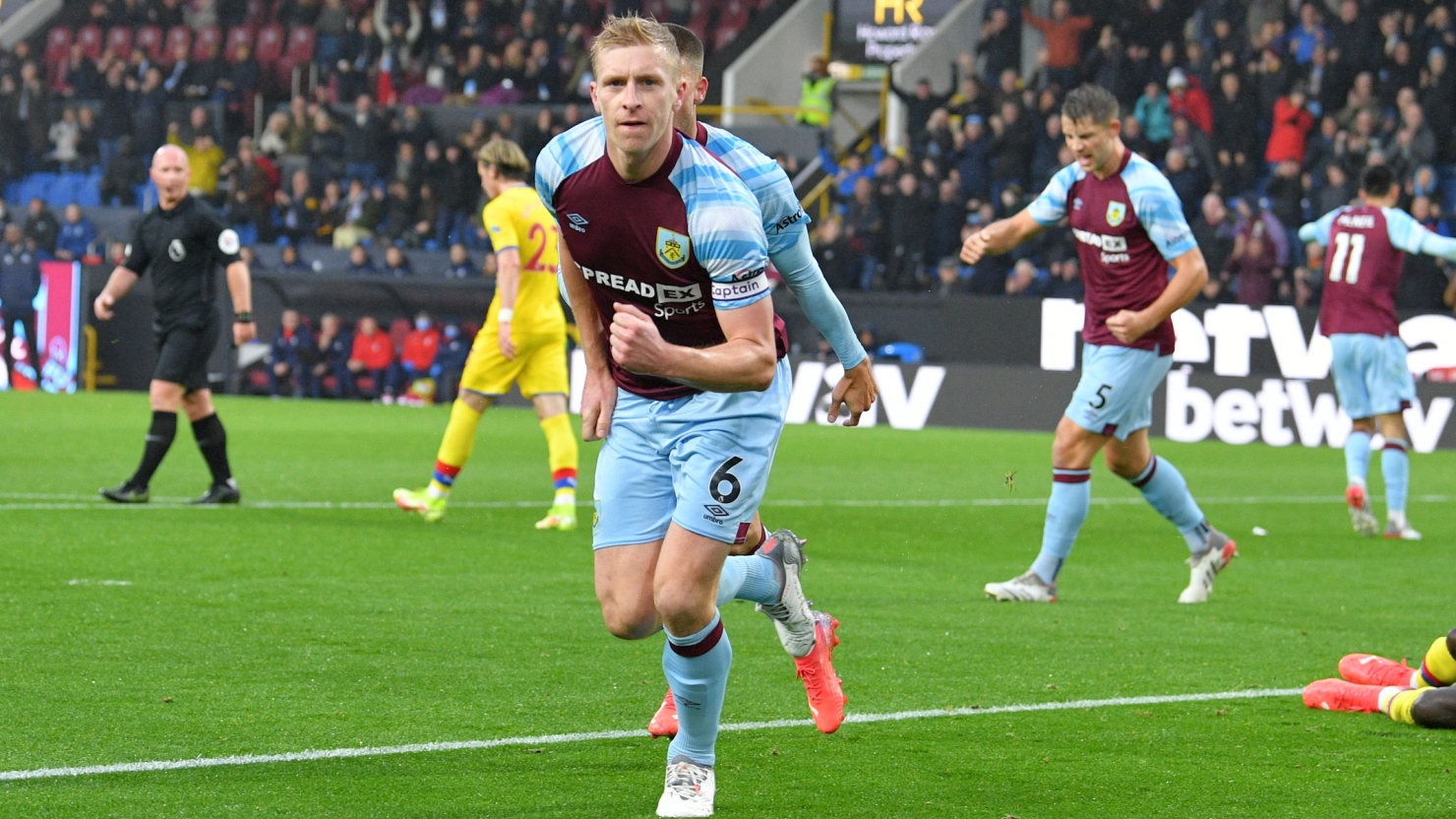 The Eagles almost made it two straight from the restart but after robbing the Clarets of possession, Conor Gallagher struck his shot straight at a grateful Pope.

Burnley were struggling for the fluency that blew away Brentford in their previous Turf Moor outing but soon levelled it up when Mee crashed a header home.

The Burnley skipper – lauded by the footballing world this week for sharing his story about the premature birth of his daughter – rose highest in a jam-packed penalty box to firmly meet Ashley Westwood’s corner and power past Vicente Guaita.

The Clarets came close to scoring a second immediately after but Gudmundsson’s cleverly-flicked effort drew a smart save from the Palace shot-stopper.

A helter-skelter game was unfolding as Zaha and Benteke combined to go close before the Palace winger and James Tarkowski were both booked after a skirmish.

Burnley were denied a penalty when Cornet went down in the box but soon claimed the lead when Wood – who bagged a brace for New Zealand against The Gambia on Tuesday – steered home.

Tarkowski won the knock-down from McNeil’s delivery before the Kiwi ace angled in an accurate header to silence the travelling fans.

The frantic contest continued when Benteke missed a free header to equalise but it didn’t take long for the former Liverpool hitman to make amends. 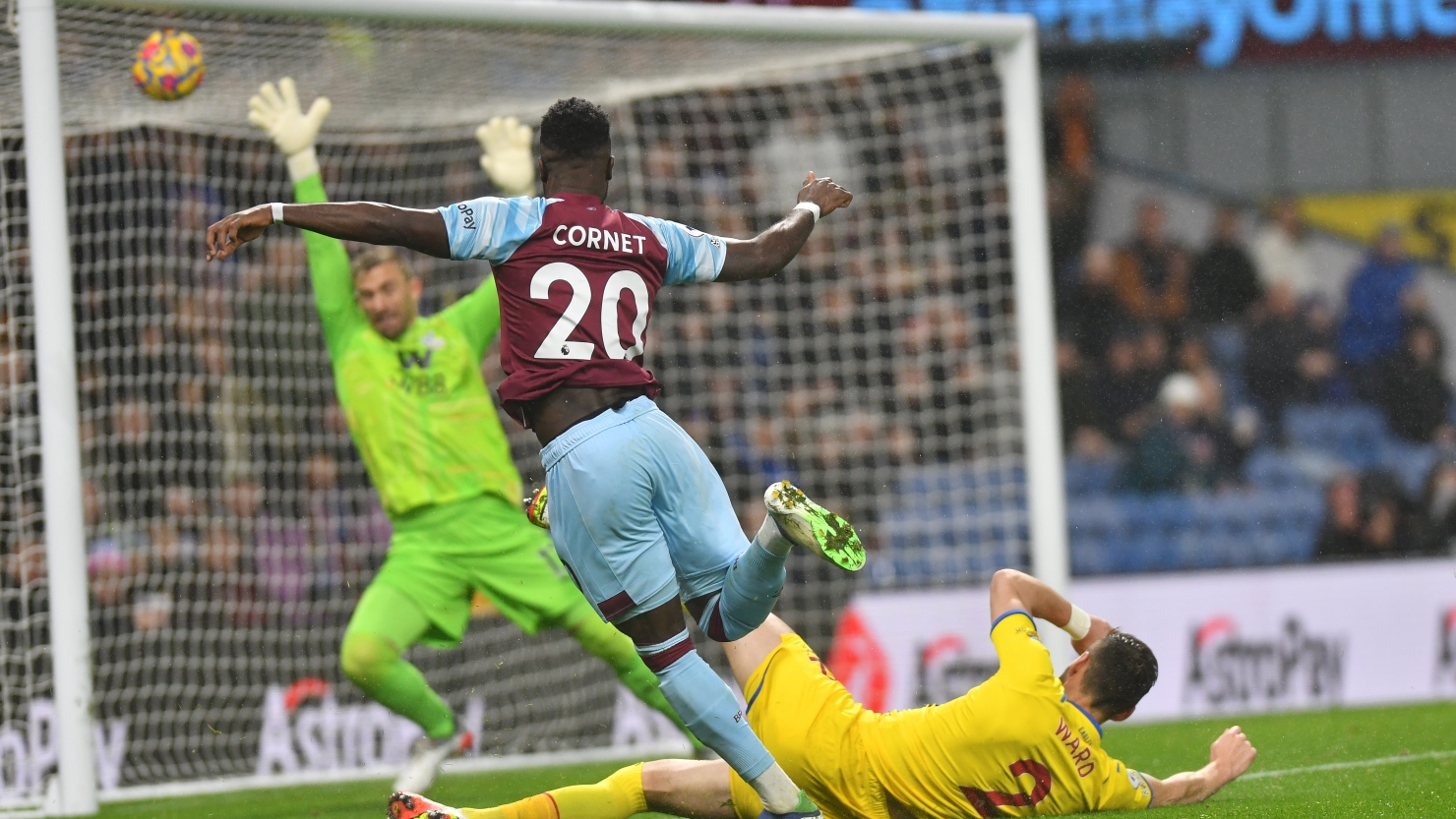 Gallagher’s pass found the Belgian free in the Burnley box and he coolly slotted home to restore parity once more.

And goal-fest then intensified when Guehi capitalised on a period of pinball in the Burnley box.

Pope made an excellent reaction stop from Andersen’s header but was unable to deny the England Under-21 defender, who rifled home to end a chaotic opening period.

Milestone man Gudmundsson scored his first Burnley goal against Palace in 2016 and came close to repeating the feat when he fired wide at the start of the second half.

But just seconds later, that man Cornet stole the show to score his fifth Burnley goal and trigger jubilant scenes under the lights.

The rapidly-emerging fan favourite, 25, was on hand to meet Tarkowski’s flick-on and unleash a rising rocket on the volley which flew into the roof of the net.

Referee Simon Hooper was once again unmoved when Wood appeared to be hauled down when through on goal before Gudmundsson was thwarted by Guaita.

And from one left-footed volley to another, the drama was soon unfolding at the other end as Zaha saw his powerful effort tipped acrobatically over by Pope.

Tarkowski had a header saved by the busy Guaita before Dyche then opted to make his first change of the non-stop encounter, bringing on Jay Rodriguez for Wood.

Vydra was thwarted by another Guaita save in the dying moments but the heart-thumping contest ended in a draw after Cornet’s moment of magic.